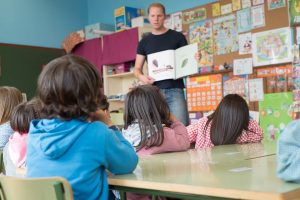 In second grade, Kelly Crull’s teacher gave him a blank book and told him to fill it with his own story. He filled an entire bookshelf at his school library with them. His joke book had a waitlist! Even when he was not in art class, Kelly would fill his notebooks with doodles and sketches. Once, he had to make a bug collection for science class—and instead of catching bugs from his backyard, he crafted his own collection of exotic insects out of paper.

Today, Kelly is the author, illustrator, and photographer of a short stack of books, including his non-fiction picture book debut, Washed Ashore: Making Art from Ocean Plastic (Millbrook/Lerner, 2022). Kelly creates playful, often funny stories about some of the most challenging topics children face today—climate change, conservation, and the environment. His work has been featured on Good Morning America, The Today Show, Glamour magazine, Slate.com, and his parenting videos garnered YouTube’s “Top 50 Videos of the Week” award.

Kelly’s lively school visits have been known to include reenactments of the Running of the Bulls and La Tomatina, the world’s largest food fight. Crazy fiestas like these happen every day in Spain where he lives with his wife and three children in an old stone house between a castle and a palace.